A panic exit device is also known as a panic bar, crash bar, or push bar is a type of safe door opening mechanism that allows people to push a bar on the door when opening the door. According to some experts, the panic exit door was originally perceived and created in case of panic and also to prevent crowd crushing and rushing in an emergency and put a stop to stampede, but many commercial buildings now use panic exit devices as their primary door mechanism. The panic exit devices are used for doors that open to the exterior of any building. It is also paramount that you check your life safety officers and building code, inspectors to know the correct exit devices for your building and the best place to put the device.

Some types of buildings like educational and assembly facilities and buildings that have up to 50 or more persons occupying plus high-hazard occupancies, also electrical and battery rooms must have panic exit devices installed on their doors ordered by the International Building Code (IBC 2006). Most times, the IBC officials may demand that you install panic exit devices on other types of buildings depending on the local jurisdiction. A panic exit device is seen as a locking mechanism that can be released quickly by applying pressure in the right direction and pushing on a horizontal bar. 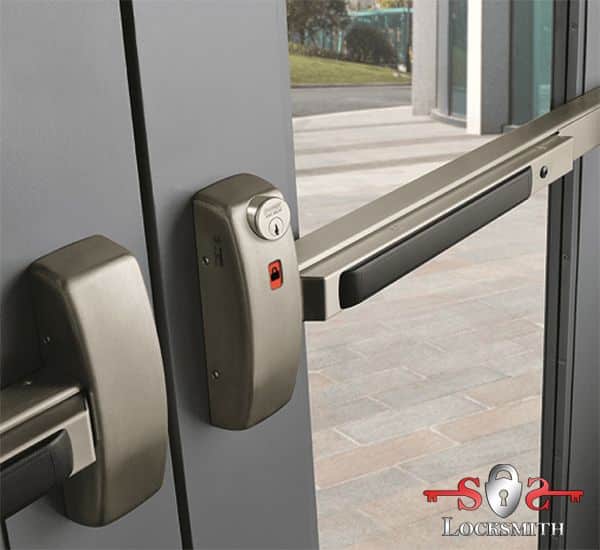 The panic exit device is built with components like a spring-loaded metal bar which is fixed horizontally to a door as stated earlier. Pushing on the bar should unlock the door by releasing a latch allowing quick exit during an emergency. Before any device or hardware can be classified as a panic exit device, the device should have the following features

The panic exit devices came into existence and gained popularity due to some tragic events around the world. Like the one that happened in England around 1883 which led to the death of 183 children because a door had been bolted at the bottom of a stairwell, there was a panic in the Victoria Hall and children started rushing out and the door was locked, this caused a stampede and the eventual death of kids. This gradually led to the lawful requirement that public and commercial venues must have a minimum number of outward opening doors and locks that can be used to open the door from the inside. This particular disaster motivated the invention of the panic bolt by Robert Alexander Briggs.